“Through broken walls and gray

The winds blow bleak and shrill:

They are all gone away.”

“The House on the Hill”

The setting sun peeped over the rim of the red rock canyon walls far overhead. I was aware that the winter night would soon descend over my stretch of the southwestern desert. My only companion on this winter evening was Tiger, my mixed-breed border collie.

There are those who would have considered it unwise, even foolhardy, to venture solo so far into Arizona’s Canyon de Chelly and descend the steep trail down toward the ancient Anasazi structure known as White House Pueblo. Yet, I was exactly where I wanted to be and it was all exactly the way I wanted it to be.

In the silence of the high desert, with no sound but the song of the wind among the overhanging red rock crags and the occasional “kraa”, “brrronk”, and “prruk” of ravens, I imagined what the pueblo must have been like in its heyday. People would be going about their daily tasks, cultivating the Three Sisters; corn, beans, and squash. Children would be playing, women weaving rugs and tapestries, creating elaborate clay pots. The desert air would have been perfumed by the aroma of smoldering campfires of pinion and white pine. In my imagination, it would have been a sort of Eden, characterized by peace and prosperity.

As Tiger and I wandered around beneath the adobe walls, I caught myself wondering if the “Old Ones,” as the Navaho refer to them, were watching me. Did their spirits still hover over the canyon floor, keeping watch over the lone human interloper and his canine companion. And, I wondered, as so many have before and since, what the fate of the Anasazi must have been, what caused them to abandon their settlements and carefully irrigated crops and wander off.

The heyday of White House Pueblo ended around 1300 AD, after the Anasazi had dwelled there since approximately 1060 AD. It may have consisted of 80 rooms and four kivas. There were two levels, still visible today: an upper level to provide sanctuary in case of enemy attack and a lower level providing access to irrigated farm land.

Back in the early autumn, I had followed two wheel ruts across the desert, carefully navigating my way among an obstreperous herd of white-faced cattle, in order to visit Pueblo Bonito in New Mexico’s Chaco Canyon, far to the east. At its height, Pueblo Bonito had been a vibrant population center. The remnants are still impressive to this day. What we know with some certainty is that somewhere around 600 AD native farmers began to filter into the canyon, attracted, as all desert people necessarily are, by the presence of water, in this case rain runoff from side channels.

For centuries, Pueblo Bonito functioned as both a trade and religious center. The structure may have housed as many as a thousand people. Perhaps more. Others were housed in nearby pueblos scattered across the area. A great amphitheater occupied the center plaza. Some structures were over 500 feet high. And a sophisticated highway system connected the various centers spread across the desert.

The center of each Anasazi community was the kiva, sometimes several kivas, depending upon the population. A kiva is a large round underground chamber constructed and maintained for ceremonial purposes. While in the public imagination the kiva is often associated with kachina belief, kachina veneration did not appear until after the great centers were mostly abandoned. Perhaps kachinas can best be thought of as nature gods or goddesses. In the case of the Hopi, living high on their three sacred mesas in northern Arizona, the kachinas are believed to have transported mankind to earth from the heavens.

A vigorous trade was conducted with other Native peoples. While other trade items were involved, the most valued was turquoise. The raw stone was transported to the canyon where it was processed into small pieces of tile, then carried south into Mexico and converted into exquisite jewelry, much as contemporary Navaho and other Native Americans continue to do today.

It can be said that the flourishing civilization of the Old Ones deteriorated and collapsed under the weight if its own success. Wealth flowed in to Pueblo Bonito from across the Southwest and from deep in Mesoamerica in the form of gold and other metals, colorful tropical birds, and whatever else was deemed valuable by the Anasazi. As such goods became more abundant, population grew. Eventually, the population outstripped the resources necessary to sustain such numbers. Deforestation and water management issues led to diminished resources and a more precarious lifestyle.

As Chaco’s most important trading partner, the Toltecs of Mexico, spiraled into civil disorder, the Old Ones turned to other sources for turquoise. Greater access to turquoise may have caused it to lose value, leading to ever greater economic woes. By the thirteenth century, the great Chaco Canyon civilization was little more than a memory drifting over the red rock country on desert breezes. Then, too, a fifty-year-long period of severe droughts most likely exhausted what water resources had been available, the final nail in the Anasazi coffin. Thereafter, there would be no sound but the wind, as I experienced it during my solo ventures into the dead villages of the Anasazi so many years ago.

Other centers of the Old Ones continued to expand, flourish and disintegrate. Dr. Jared Diamond in his book Collapse: How Societies Choose to Fail or Succeed explains that the supply of firewood was exhausted, that the wood necessary for the construction of the heavy beams holding up the roofs of kivas had to be transported all the way from the Chuska Mountains far to the west, without the benefit of any draft animals. Add that to the diminished water resources of that era, and collapse is a foregone conclusion.

In reality, the Old Ones did not completely vanish, even though their societies disintegrated into violence and even cannibalism. They live on by way of their DNA passed down to such modern southwestern peoples as the Hopi, the Zuni, and others. New Mexico’s Laguna and Acoma people continue to inhabit viable pueblo societies.

The Old Ones may provide a vital lesson for humanity during our present global extravagances in that overpopulation of any area leads to diminished resources, causing poverty, civil strife, and eventual collapse. The evidence of such a reality is all around us in increasingly frequent and severe weather fluctuations, vast brush and forest fires, life-threatening floods, rising ocean levels, vanishing species, bleached-out, dying coral reefs, and other dread phenomena, all, it seems, consequences of human activity during this era now referred to as the Anthropocene. As Chaco goes, so goes America, so goes the world.

The words attributed to ravens are direct quotes from Sibley’s Field Guide to Birds of North America. My attempts at translation have all met with failure, as ravens, whenever interviewed, have only responded, “Nevermore.”

Lorin Swinehart
I grew up in rural and small town Ohio. Following a 36- year high school and college teaching career, including English and Native American Studies classes in Ohio penal institutions, I became a National Park Service Ranger. I served for twelve seasons at parks in Ohio, North Carolina, Florida, Arizona and Colorado. I have been active in environmental affairs for most of my life, serving the Sierra Club twice as Congressional District Coordinator.

My enthusiasms include fly fishing, natural history and wilderness backpacking. In 1996, I published privately a memoir, Trails of Laughter/ Trails of Tears, featuring my wilderness adventures and misadventures.I serve when needed as a Licensed Eucharistic Minister in the Episcopal Church.

The Day After the Day of the Dead 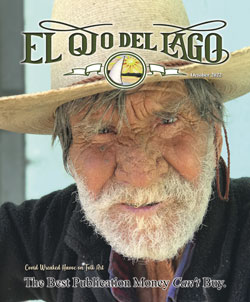